When I caught up with my friend Adel Maymoon I wanted to talk about passion and purpose, this was my current theme for the Eyes Wide Opened blog.  My impression of Adel was that his work choices were directly linked to his passion and purpose for technology and social media but what we ended up talking about gave me real pause for thought.

I met Adel via work that I was doing at the eGovernment a couple of years ago in Bahrain.  Adel had left the eGov to set up a consultancy of his own, he had worked there for a number of years and had developed some interesting skills that were in demand.  Since we met I have observed his progress through Facebook posts and hearing on the grapevine what he is up to.  After we had spoken, I realised I have been filtering for professional success, and had not fully taken in his broader picture.We ended up having a really interesting discussion about the purpose of work, the meaning of life and he really challenged me to think about why I was “hung up” on leaving a legacy through my work.

So back to Adel’s map of the world…..  He told me that he had recently had to ‘fire himself’ and had taken stock of his priorities.  He had needed to “go back to his bigger picture”.  His passion is not work related and his answer to the “why do we work” question is about earning a good living so that he can live a good life.  For him he wants to be able to “live a moral, noble and quality life” and will be able to do this through his work.  He rehired himself on new terms.

He has a set of very personal priorities that are related to his spirituality, his health, his family and work comes in at number 4 on this list and this is as a means to an end.  He wants to be able to do meaningful work that leads to personal independence. The ability to sustain ‘a quality life’ without any debt.   For Adel a quality life is being able to do all the things he is passionate about:

He is very clear that his ‘quality life’ is about balance – all of his priority areas in balance.  When he is out of balance it is because he is not sticking to his routine, not meeting his goals.  I don’t get the impression that Adel watches much TV.

By this stage in our conversation I was building a picture of someone who embraces goals and the discipline that goes with them, someone who commits to things and follows through.  (Note to self:  pay much more attention to how I spend my time). He sets annual goals related to the five areas of his life and makes sure that he uses his time mindfully.  Interestingly he has financial goals that seem to be contradictory:  To be debt free and to be able to buy what ever he wants.

Contradictory until you realise that another goal is to get to the point where all his possessions fit in one suitcase.  I can relate to this goal, but am some way short of realising it.He has decluttered:  down to 7 thobes, all the same shade of white, 1 watch (sold the other 6).  Shoes were a challenge, apparently he loves shoes, and you can see a faraway look come into his eyes.  He told me that at home there had been two shoe closets (one for 5 people and one just for him).  He now only has two pairs of dress shoes, one pair of sports shoes and one of sandals. His higher order goal of independence trumps his desire to hang on to things, or to acquire any fancy footwear. 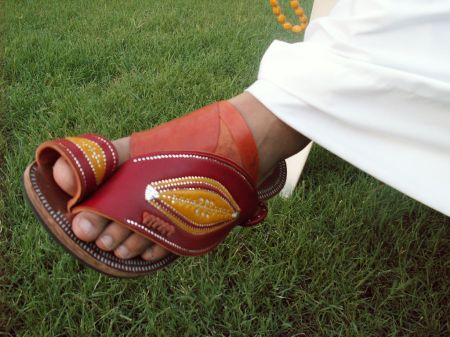 To be able to live his quality life he needed a nest egg, enough for a year so he could stop ‘needing’ to do full time work, even if he choses to work full time on projects.  Now he thinks in terms of 2 – 3 years per project so that he can keep learning and changing. “This mindset stops me from getting stuck.  Being self-employed means that I can create my life in my way.  Challenging my materialism has created the freedom I need and staying debt free will mean I can do whatever I want, whenever I want”

There is a potential flaw in this lifeplan:  He wants to move out of the family home. However, in order to move out from home, Adel tells me that his mother will only be happy for him to do this if he gets married.   He likes to keep his mother happy.  I have never been married but my observation of others who are married is that the kind of routine that Adel has built may get disrupted.  One suitcase may not be enough.

I was very surprised at the turn our conversation had taken, I was sure that Adel had been very work focused, perhaps even a bit driven about work.  I had been wrong, he has been seeking his version of the ‘good life’ and rather refreshingly work is an enabler and not an end in itself. As we were walking back to our respective cars (my debt free Micra and his debt free Lexus) he asked my “So what is this obsession you have about legacy, this is your life, this concept of legacy is a weight you don’t need”

Perhaps he is right, perhaps a notion of ‘legacy’ is my way of copping out (my interpretation not Adel’s), a way to create some structure for my fifth decade.  In reality I am free to do whatever I want to right now.  And the truth is I was probably free to do that in my twenties.  I know I stuck at jobs I wasn’t happy in for reasons of security and a belief that I would be taking a risk to move into the unknown.  So I think what is important to me is to help others to know themselves and how to create opportunities to find work that they love.

I think what I learned from talking to Adel is that creating your quality life takes commitment and discipline and creating a hierarchy of priorities so that going to the gym makes more sense than watching the third season of House of Cards.  And we have at least one passion in common, we love shoes.  I have a way to go to get my collection down to four pairs, but I have been making progress.